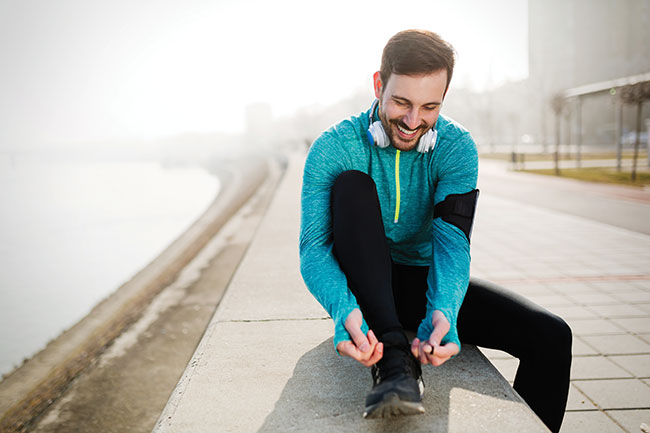 The original article can be found HERE.

In the sports world, hamstring injuries can permanently derail a career, or change a weekend warrior’s life for the worse. These injuries are very common, yet they aren’t being managed particularly well. How many people do you see at the gym, telling you their hamstrings are “short” and they have to keep stretching them?

Patients see their local physiotherapist, chiropractor, or AT, who then explain how common these injuries are, and how over the next 12-16 weeks the patient’s hamstring would become “stronger” and “more flexible” than ever. The plan of management starts. Some progress is made, and after the plan of management is complete, the therapist may give their patient a pat on the back and say, “you’re good!.” Then it happens again, and the patient may never feels quite right.

Hamstring muscles are rarely anatomically short. In severe cases of cerebra palsy or spastic diplegia, surgical intervention of hamstring lengthening can reduce pain and improve quality of life. For the average person, the reason their hamstring injuries continue to return is because they aren’t addressing the major factors: the pelvis, knee, and ankle. In school, we are always told to evaluate the joint above and below a problem. Poor biomechanics of the upper and lower sacroiliac joint, poor knee rotation and sub-talar restriction has been found to

put athletes at higher risk of hamstring injury. A JMPT paper (Feb 2011) by Massoud et al, gets it backwards. The researchers indicate that hamstring tightness affects the sacroiliac joint. However, due to the effect of afferent influences of the pelvis on motor control, the opposite is likely true. It’s a chicken and egg scenario – if a problem re-occurs post treatment, look to the influencers and not the injury location itself. This strategy is backed up in the International Journal of Sports Sciences and Human Movement, with a 2019 paper by Saunders et al that postulated this exact finding.

A case study: A 5’7, 155lb male sprinter. In April 2013 at a Florida training camp, this individual sustained a left hamstring injury approximately one week into training. He lad local tenderness along the distal portion of his posterolateral thigh and was able to flex his knee with only mild pain. The explanation given to him was that he suffered a major hamstring cramp. Symptoms resolved quickly over two weeks and was even able to compete a month later. No treatment was done during this time frame. Two months later, another event occurred to the same hamstring during a training session. The individual had to stop sprinting as he felt a painful and pulling sensation in the back of his leg. Hours after, swelling appeared in his posterolateral thigh, where even a “bump began to form in his left glute.” He made an appointment with a physiotherapist who diagnosed him with a grade 2-3 tear of the left biceps femoris. No imaging was done. He was referred to another physiotherapist who specialized in sports injuries, where they came to a similar diagnosis. A 12-week treatment plan was administered. This plan consisted of ultrasound, laser, and isometric exercises, which eventually progressed into concentric and eccentric phases. The individual was able to start running at ~50% max velocity at week 10 with only mild discomfort. This eventually progressed to ~75-80% max velocity at week 12, where the treatment plan ended. He was able to start training full time near the beginning of early October. The athlete was able to sprint at 100% max velocity in November, and even had a competed in races in late November and early December. However in January of 2014, the athlete sustained a right-sided knee injury doing a squat jump during a training session. The individual saw a chiropractor who diagnosed him with a grade 2 patellar tendon strain. During this exam, it was determined that the athlete had tibial torsion in an external position, and sacroiliac joint dysfunction. Correction of both of these problems, and remedial care to the affected tissues of the leg (hamstring included), resulted in a return to competition with no recurrence of hamstring issues.

In conclusion, joint afferentiation has a significant impact on many muscle and tendon/ligament issues. Especially in cases of recurrent injury, look to re-establish proper motor patterning in the related joints in order to help remedy your complex problem.

Try this experiment: Have your athlete perform a nordic hamstring curl, and measure the distance at failure. Reset the test, and then compress both sacroiliac joints for three seconds and repeat the test. Does your athlete get further? Let us know!