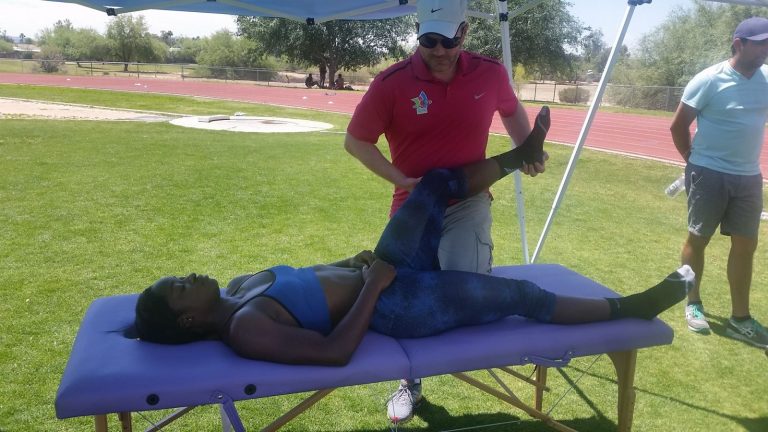 This article was written by Dr. Erik Klein and reported by the Athletics New Brunswick website in August 2016.  With the Tokyo Olympics approaching, we felt it would be appropriate!  Dr. Erik is a past and present Masters Age group athlete, former national champion and provincial record holder.  Dr. Erik currently sits as a board member for ANB.

Caitlin Marshall, Athletic therapist, has also attended the Altis program and is available in Saint John.

This week we are reveling in the best that track and field has to offer in Rio.  These performances are a mere moment in time, the proverbial tip of the iceberg of many years of complex training.  Training strategies are moving forward to break down the barriers between the athlete, coach, and therapist.

In May of this year, I had the opportunity to attend the Performance Therapy Program at Altis in Phoenix Arizona.  This is the world renowned program created by the throwing giant John Godine, and further developed by legendary coach Dan Pfaff and his protégé Stuart MacMillan.   Elite track athletes are abandoning their sponsored national programs and paying to move to Phoenix to train because of the system that is in place.  Olympic 100m bronze medallist Andre deGrasse and 2012 London Olympic long jump champ Greg Rutherford are prime examples.  The therapy program is run by legendary sport chiropractor Dr. Gerry Ramogida who has been able to marry functional models of care and athletic performance directly with coaches in track and football.

Dan Pfaff, early on, saw the necessity to integrate therapy track side to not just treat injuries, but to improve the function and movement of the athlete.  Therapists, who include chiropractors, physiotherapists, and athletic trainers will intimately get to know athletes and are able to make minute small changes within the training cycle, literally in between repetitions.  All of this, of course, is within the program of the coach and dependent on the time of the year.  As we were told, many athletes can barely be touched within a week of competition, while Donovan Bailey could be adjusted within an hour of a race and would excel in that environment.  The key point here is that knowing your athletes is essential and developing a plan in concert with the coach is imperative.

After class sessions in theory we were provided with Olympic and Olympic caliber athletes where we observed movements, identified issues, made changes on the table, and retested the same movement on the track.

Wicked awesome story:  In one of these exercises, an African Olympic hopeful had been running above standard, complaining of left sided hip and leg pain.  My assessment indicated that there were problems with the RIGHT side with improper hip rotation, psoas (hip flexion) activation, and midfoot joint restriction. While addressing these with manual muscle and joint strategies (we had 5-8 minutes) pain returned to the left side.  Seeing the direct link, I palliatively brought the left side under control and sent the athlete back out.  The right hip rotators were stable, and there was no pain on the left side.  One week later, she broke her national record in the 100m, and went under standard.  She made it past the first round at the Rio Olympic Games.  Her dreams had come true.  On facebook she told me that her pain never exceeded 20% of what it had been.

I returned to Saint John, and through the summer, myself, and one of New Brunswick’s top sports massage therapists Josh Fry spent time at the track, implementing what concepts we could from my Altis experience.  There clearly are restrictions and it will take a number of seasons to fine tune what could be a huge benefit for the athletes.  We rely on volunteer hours of our participating clinicians, support from coaches, understanding from the athletes themselves, and trust from the parents.  There are legal (confidentiality) barriers to overcome but we’re getting there.  Even with the first go around, we picked up on many issues that affect performance and we certainly saw the benefits of our interventions, which luckily were usually on the simple side.  Sometimes knowing to do nothing is a winning strategy.

Track and Field is on the upswing in New Brunswick with phenomenal athletes like Gen Lalonde making Olympic finals and UNB track and UdeM making huge strides each season.  If we’re going to ask our top athletes for their best, we as a track community have to be willing and prepared to give them our best.  The results will speak volumes.

I wish to acknowledge and thank the board of the Saint John track club for the financial support of this endeavor.  If any coaches, therapists, or trackie parents are interested in seeing some of the video of what we did, or to gain further insight on the program please feel free to email me at drerikceo@townhealthsolutions.com