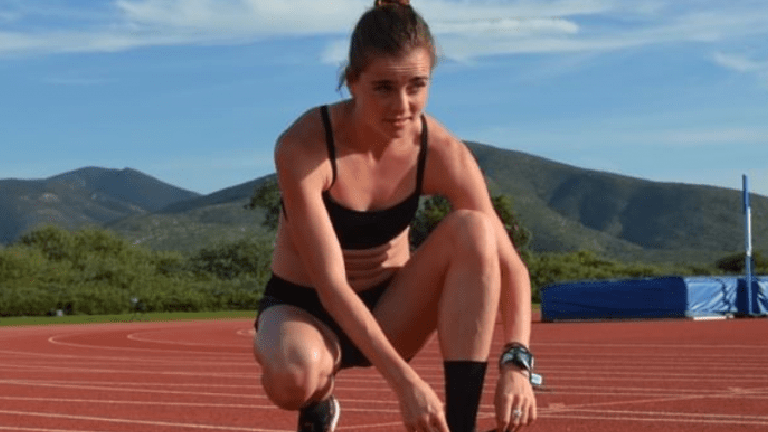 A thousand one… a thousand two.

As advanced as the workouts, technical training, science, physio and nutritional data are in the universe of elite athletics, the end game gets simple, quick: if Annear can shave two seconds off her personal-best time, then this 800-metre specialist from Hampton has a real shot at representing Canada at the IAAF World Track and Field Championships, slated for Aug. 4 to 13 in London, England.

For the record, she owns a PB of 2:03.3 and must clock 2:01, or better, by the time the national championships ends their early-July run in Ottawa. While it’s possible the standard could be achieved at the meet, Annear is taking a pragmatic approach to the task at hand.

“Time standards are almost never achieved at the national championships because the races are tactical – runners go out slow, then kick hard,” she said. “The final time is not going to be super-fast, so really, you have up until the final meet before the trials, which typically end 10 days to two weeks before then.”

While the world championship is the lead item on Annear’s bucket list for 2017, there are other options for top-calibre competition. The 24-year-old has already qualified for Team New Brunswick’s entry to the eighth Jeux de la Francophonie, set for July 21 to 30 at Abidjan, Ivory Coast. She could also be part of Canada’s contingent for the FISU World University Games, which run its course fromAug. 19-30 in Taipei, Taiwan.

To know Annear is to understand her passion for excellence, whether she’s pursuing athletic goals or drawing on the creative side of life.

With a Masters in Creating Writing, she blogs about The Adventures of Sarah and Grace on the Athletics New Brunswick website, offering a narrative about life as elite middle distance runners (in this case, herself and Fredericton’s Sarah McPherson).

And, she welcomes the opportunity to give a shout out to Dr. Erik Klein and the great folks at The Town Chiropractor; afterall, says Grace, by treating her injuries over the years and assisting financially, they have played a rather significant role in helping turn an opportunity to pursue her athletic dreams into a reality.

But even before this latest episode in her life plays out, a cursory look into what she has achieved on the track will make it summarily easy to conclude that Miss Grace Annear is already a winner. To wit:

There are lots and lots of provincial records and meet victories and… well, you get the idea: this future law student belongs on the track. In her continuing pursuit of excellence, she has returned to her old collegiate stomping grounds of Victoria – you see, Annear took a leap of faith in January and joined Athletics Canada’s West Hub training centre and under a program called NextGen, which takes its athletes to warm-weather and altitude training camps and to major meets across North America.

“I moved back to probably the best training environment in Canada,” said Annear, “and was immediately blown away by the support. I’m being coached by the outstanding Heather Hennigar. I have an incredible group of training partners. I have so many resources that are going to make this next leap possible. Everything I think I need, and more, they have. If I am going to do it, it’s going to be in the situation that I’m at right now.

“It’s encouraging to be constantly learning things and experiencing the sport on a continuously deeper level. It seems like every time I go to practice, which is twice a day, I’m learning something new. It’s also made me more appreciative of the resources I have… with age, you mature and become more aware of everything. If I had had this opportunity at 18 or 19 – and I did have some pretty great opportunities in my undergrad at the University of Victoria – I would not have been as appreciative of the resources as I am now.”

As the conversation continues, Annear dives into the world of high-performance training. Take, for instance, the emphasis the program places on form and technique.

“It wasn’t really something that I practiced during my undergrad,” said Annear. “When I came back, and because I had so many injuries, I was very careful about form and technique; I bought textbooks on anatomy and studied how my body should be moving so I could prevent injuries.

“I thought I was doing pretty good. Then I got out here and there are people filming our workouts and analyzing things and constantly giving us cues and telling us how to turn our heads, turn our shoulders, hold our hands. We had a specialist come in last week and for an hour, worked with us on foot strike. Literally, she practised with us the amount of time our feet touched the ground and I can tell you it is not very much time. This group is so specific, we do not leave any detail unattended.”

There was a time when Annear never imagined the possibilities that are now before her this summer… a time when her track career was over.

“I retired in 2014 – I walked away never intending to compete again,” she said. “I came back because I missed it and I’ve kept going because there’s nothing that I would rather do – I love it every single day.”