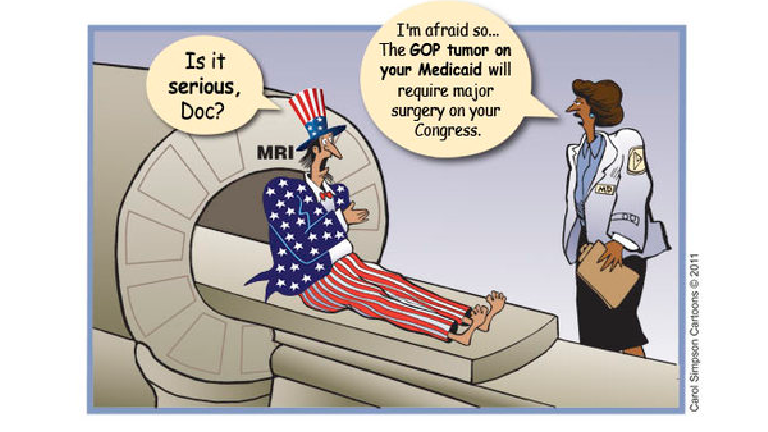 In Canada, our health system which was designed in the 1950s is under severe stress. In order to repair what we have, it is helpful to understand what is going on in other countries. Considering the hubbub going on south of the border, I thought it would be helpful to provide some clarity on the ObamaCare issue, and U.S. healthcare in general. It should also make us feel much better about ourselves!

The United States pays almost $10,000 per person, per year on healthcare for its citizens, yet almost 25 million people go without coverage. As you would have read in my first article, in New Brunswick we spend $3,333. For triple the money, the U.S. sits last amongst industrialized nations in healthcare performance. One would think a sophisticated society would agree that healthcare coverage is an unalienable right, however this concept is viewed in the U.S. as trampling on an individual’s civil liberty to choose and has been controversial for decades.

Much is being said about this issue south of the border, so what’s the fuss?

Prior to 2009, even with these three systems, 45 million Americans still did not have coverage. President Obama set out to bridge this gap with the Affordable Care Act, colloquially called ObamaCare. Insurance at discounted prices, was made available to approximately 20 million people for the first time.

What is ObamaCare? The Affordable Care Act melds the most basic concepts of insurance and wealth distribution. In order for an insurance plan to work, you must pool risk. Since an 80/20 rule typically exists, which means 20% of the population uses 80% of the health resources, you need to increase this pool with people who aren’t using as many services.

Unfortunately, the social determinants of health indicate the greatest proportion of ongoing users of health services are the poor. To help pay for this plan, a tax was applied to those making more than $200,000 per year which was then used to provide subsidies to people who couldn’t afford insurance, which is indeed a form of wealth distribution. The law also stated that, if you did not purchase insurance, you would be fined which was a method to force more healthy people into the risk-sharing pool.

It worked – kind of. There are still 25 million people in the U.S. without coverage. Donald Trump made it a central point of his presidency to ‘repeal and replace’ Obamacare, but they failed. The proposed American Health Care Act ironically maintained most of the concepts of ObamaCare, however, it removed the majority of the financial subsidies and most of the taxes. The kick in the pants was that the fringe politicians demanded lower premiums and a reduction of mandatory policies, while moderates faced revolts by their constituents over the loss of their coverage. Considering such opposing views represented in the Republican party, a deal was impossible to make and the Obamacare replacement effort failed.

In contrast, we in Canada have one system that serves everyone equally with few exceptions. We desperately need to change what we’re doing, while simultaneously being proud of how caring and sophisticated our society is for doing it. After all, healthcare isn’t about votes – it’s about people.

Dr. Erik Klein is a health policy expert, published author, and practicing Chiropractor in Saint John and Hampton. Dr. Erik is the CEO of The Town Chiropractor with clinics across New Brunswick and a former member of the Horizon Health hospital board. He can be reached at 652-5222 or erikfcklein@gmail.com. For further information please go to www.thetownchiropractor.com or search us on Facebook.