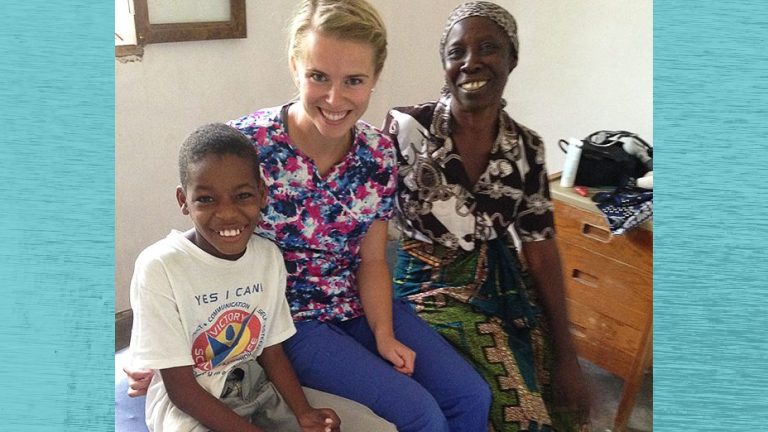 This cover story was published in Canadian Chiropractor and Naturopathic Doctor magazine on August 12 by Dr. Kayla Mayberry.

In 2016 I was fortunate enough to have the opportunity to use my new chiropractic skills to volunteer in Tanzania. I had just graduated from CMCC and was looking forward to being able to use chiropractic to give back in a needed demographic, what I did not expect was how much it would give back to me.

Through the program Global Peace Network (now under a program called Pos+Abilities) I was one of three volunteers from my graduating class. The other two volunteers had spent the summer, and I would be there for the fall months. Fortunately my friend was part of the summer pair and she was able to extend her stay by a couple of weeks to help me acclimate. I left for Tanzania in October 2016. It was a 26-hour journey that turned out to be much longer thanks to delayed and cancelled flights and no ability to rebook. Growing up in a small town in New Brunswick, I can say I was a bit naive as to how travel would work in Africa. Arriving at the international airport in Dar Es Salaam I had a couple of hours to wait for my next flight to Mwanza. The airport was quite empty, there was no air conditioning. I was traveling with my own suitcase as well as two boxes of medical supplies, which made moving around the airport difficult. After waiting for several hours, I learned my flight to my next destination was cancelled and was not immediately rescheduled. I was given the option to take a bus which would take 24 hours (not very appealing after almost 40 hours of travel already), someone offered to rebook me on a flight, but very conveniently the price of the flight continued to go up the longer they looked at the options. I had minimal to no access to wi-fi, I did not have a data plan for my phone, and felt like i was running out of options. Luckily after several hours, I was able to get one of the last seats on a flight leaving in the early afternoon. Due to the delays and lack of ability to communicate, my friend was forced to wait at the airport in Mwanza as i was unable to let her know of the issues I was having. Needless to say, when I finally landed in Mwanza and was able to shower and nap, I was quite relieved.

The initial plan had been to go to the clinic on this first day, but due to delays, my first clinic day was my second day in Mwanza. Much like my first day, the second day was a bit of a rough start. The roads were a bit of a free-for-all in some places, traffic was scary at times, there were people, dogs, bikes, and giant ugly birds everywhere. Halfway to the clinic on the first day, the driver taking us, hit and killed a puppy without even attempting to avoid it, as a dog lover, this was a hard blow. The first sentence I learned to say in Swahili was “I like dogs” (“napenda mbwa”) and i am happy to report the driver drove around every dog after that for the remainder of my stay, but it was a continued rough start. The office space was very rural. There was no power in the building, there was no running water, the washroom was a hole in the ground, there were lizards running around from room to room, the patients did not speak any English and I did not speak any Swahili, I was overwhelmed and thinking: “what have I got myself into?”

Things eventually changed. I settled in, I picked up the language, I made friends, I learned to love the area, and most importantly, I learned how powerful the technique I had spent four years learning could be, and how much of an impact it could have on quality of life. I have many patient situations stick out the most to me. I remember one woman who spoke very good English, came in and told me she had a sore knee. She laid down on the table, rolled up her skirt, and I saw the absolute worst case of knee osteoarthritis I have ever seen. Had this woman lived in Canada she would have had a knee replacement probably 20 years earlier. She had about 10 degrees of range of motion in flexion and extension, no patellar movement and so much swelling and crepitus that i had no idea where to start. I started with gentle mobilizations, and a simple exercise: I rolled up a piece of fabric, placed it under the knee and did easy quadricep activations. She came back the following week with a giant smile on her face. She proceeded to tell me how much the exercise helped and how much better she was feeling. Now to be honest, her range of motion was obviously still terrible, her swelling was unchanged, her crepitus remained cringe-worthy but she felt better. It was a powerful moment for me. 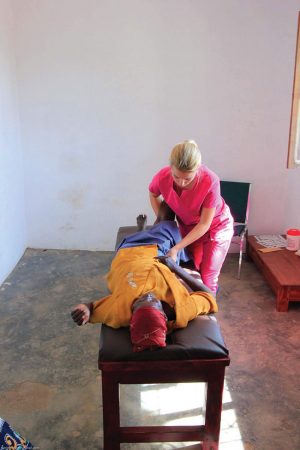 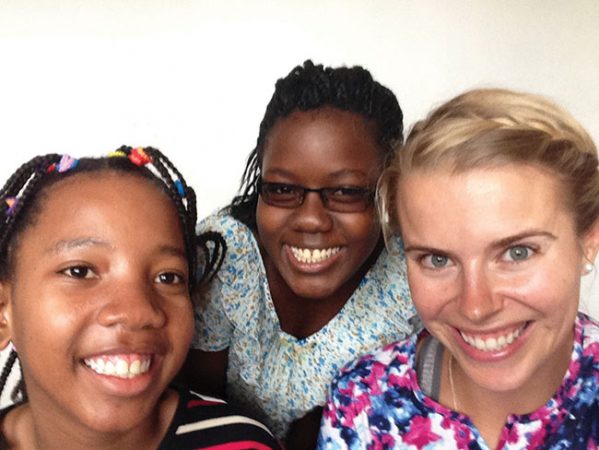 Two experiences that taught me the importance of patient education were with younger children. I saw a 14-year-old girl who had sickle cell anemia and had two strokes before the age of 12. Her mother and sister came to every appointment with her. She came once per week. We would pick them up at their house (which was nearby where I was staying), and they would sit and wait with us all day until it was time for us to return home. There was also a smiley, 12-year -old boy, who had cerebral palsy. His mother had passed away and was being raised by his grandmother. She would come to every appointment with him and take notes on what exercises we went over and how she could do them at home. Neither of them spoke any English, and while my Swahili was improving, I still struggled with communication. This young boy’s grandmother and the young girl’s mother and sister would be doing most of their exercises at home, so I made sure they practiced everything I was doing on the opposite limb. We would go over every step and they would take notes. I learned to ask if it felt the same so I could ask the patient if what I was doing felt similar to what their family member was doing. This education was important, as I knew my stay would be short-term, yet these kids’ problems would persist long after I was gone.

The patients who came to these clinics were not given an appointment. They were told the day we would be there and it was first come, first serve. They would line up and wait for hours just to be seen. Their appreciation was felt through their smiles, their kind words, or their offering of gifts (one woman offered to bring me one of her chickens as a thank you). Speaking of chickens, one story that I found particularly memorable from my time in Tanzania: One day, on the way home from the clinic, our driver, clinic manager and clinic assistant all stopped at a local market. I was able to buy a lot of fresh produce for a great price and was heading back to the vehicle. As I approached, our driver was standing by the car with a big smile on his face and a bag in his hand. His English was about as good as my Swahili so he said to me “for you” and handed me the bag. Well, as I got closer i realized it was a live chicken, inside a plastic grocery bag. He had bought this for me as a gift. I laughed and said I didn’t know what to do with a live chicken, and that he should give it to his family instead. When we got into the vehicle the other clinic workers were laughing and looking at me and I insisted they tell me what was going on. They turned around to me and said: “He is worried you will never find a husband if you do not know how to cook.”

Growing up in rural New Brunswick, I recognize the privilege I have. I have never worried about where my food was coming from, or if it was safe to drink the water. I’ve never worried about not having access to medical care, nor worried I would be eaten by a lion. Going to Tanzania changed me. It shaped who I am, not only as a person, but also as a chiropractor. I gained a further appreciation and understanding of how my profession could help others and, how in turn, that helps me. I am so thankful for the experience I was given and all I have to say to Tanzania is “asante sana,” thank you very much.

—- Please find the link to the original article here.